Quarterly Sampling and a Special Visit

From the beginning, these field trips promised to be particularly challenging, but also especially rewarding. Three months ago we out-planted 400 coral fragments that have been monthly monitored.

During the present trips, we collected samples for microbiome and epigenetic analyses, in addition to demography and physiological analyses. Although climate change is driven by increased CO2 concentration in the atmosphere, this does not prevent a shortage of this gas to produce dry ice. No one in the whole island had dry ice, leaving us with a very difficult situation to preserve the collected until our return to the lab.

With the help of our visitor, Orlando Perera, a high school professor interested in getting involved in our project with his students, we “MacGyver” a solution to effectively preserve our samples. 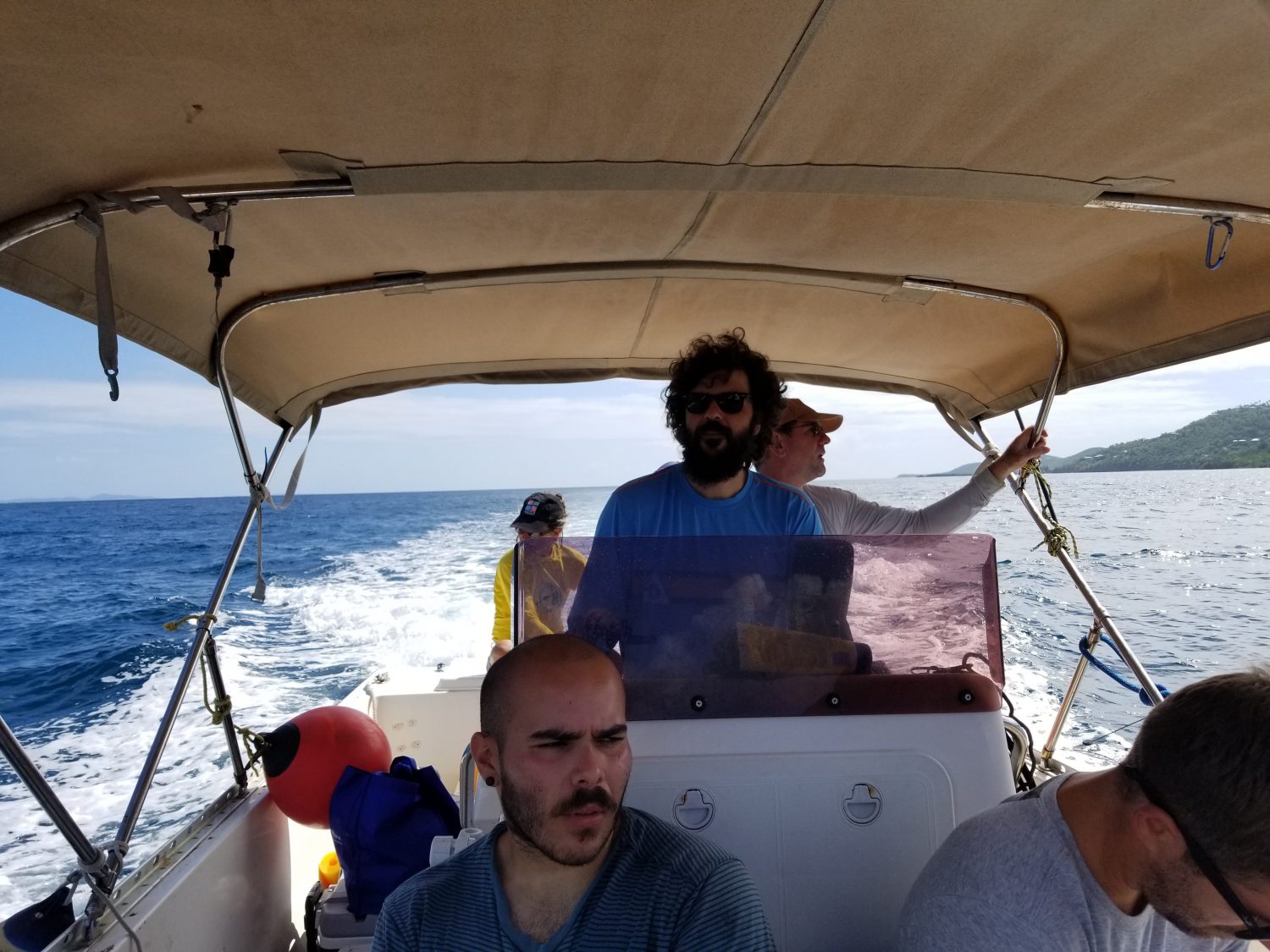 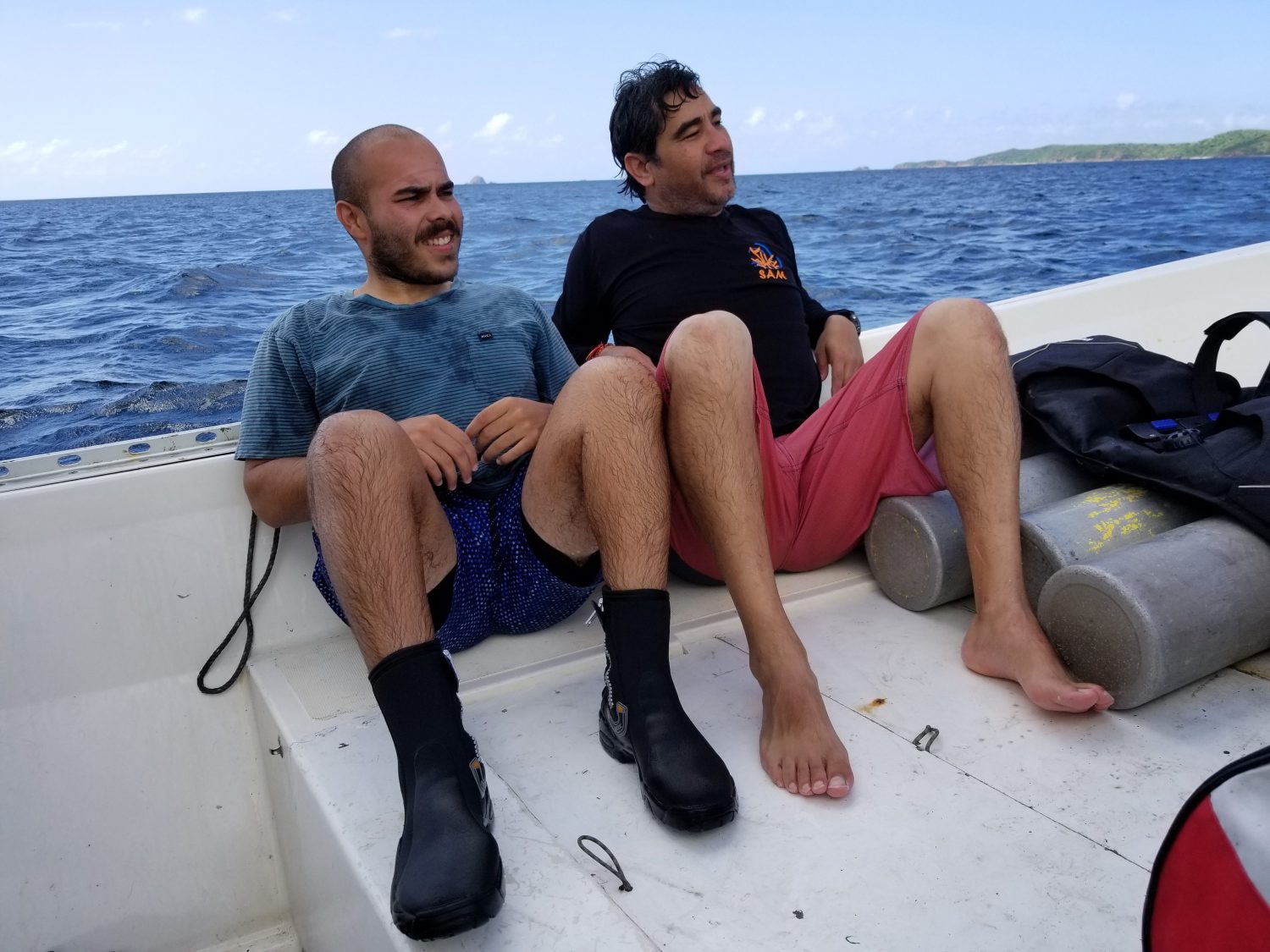 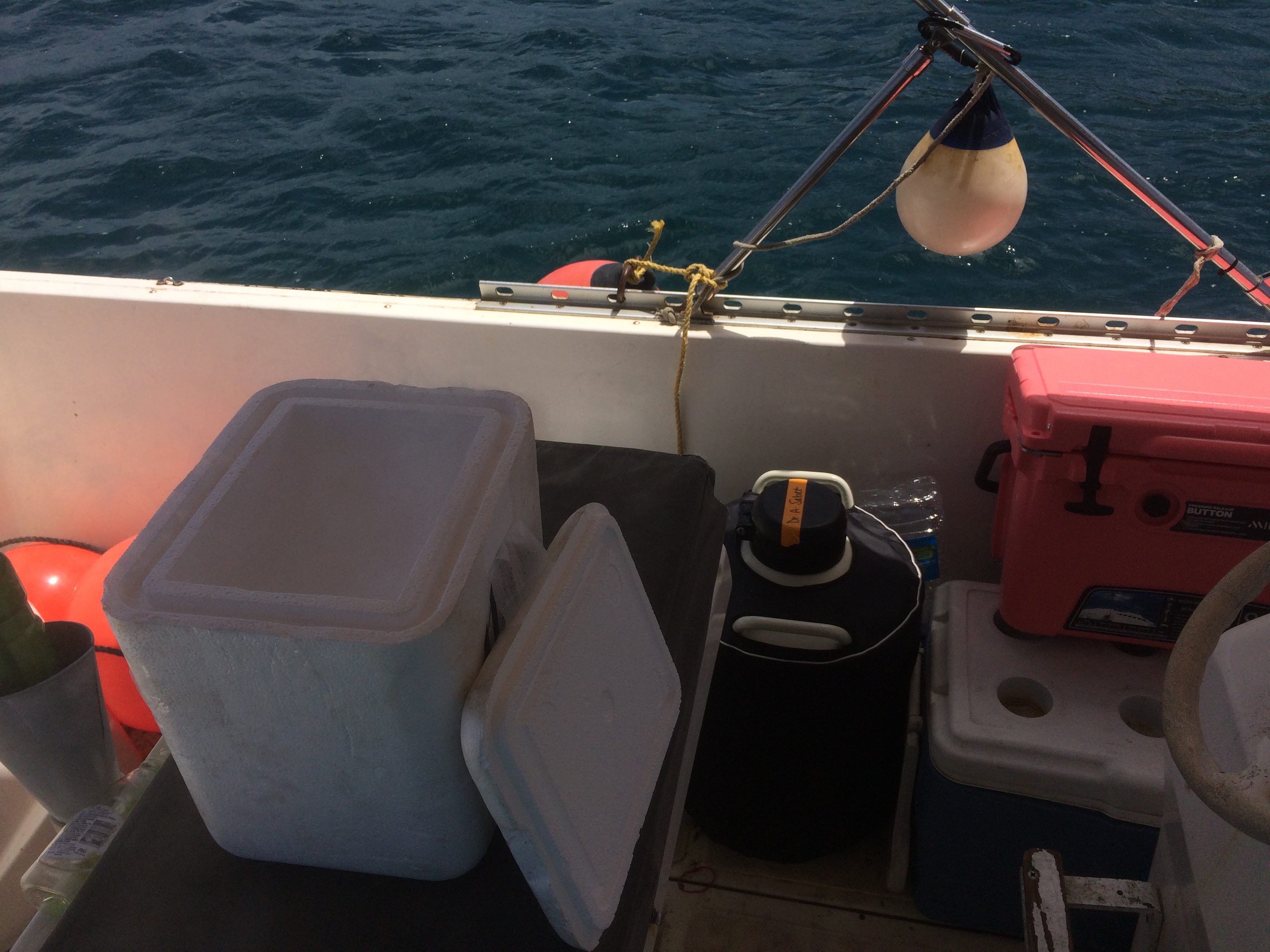 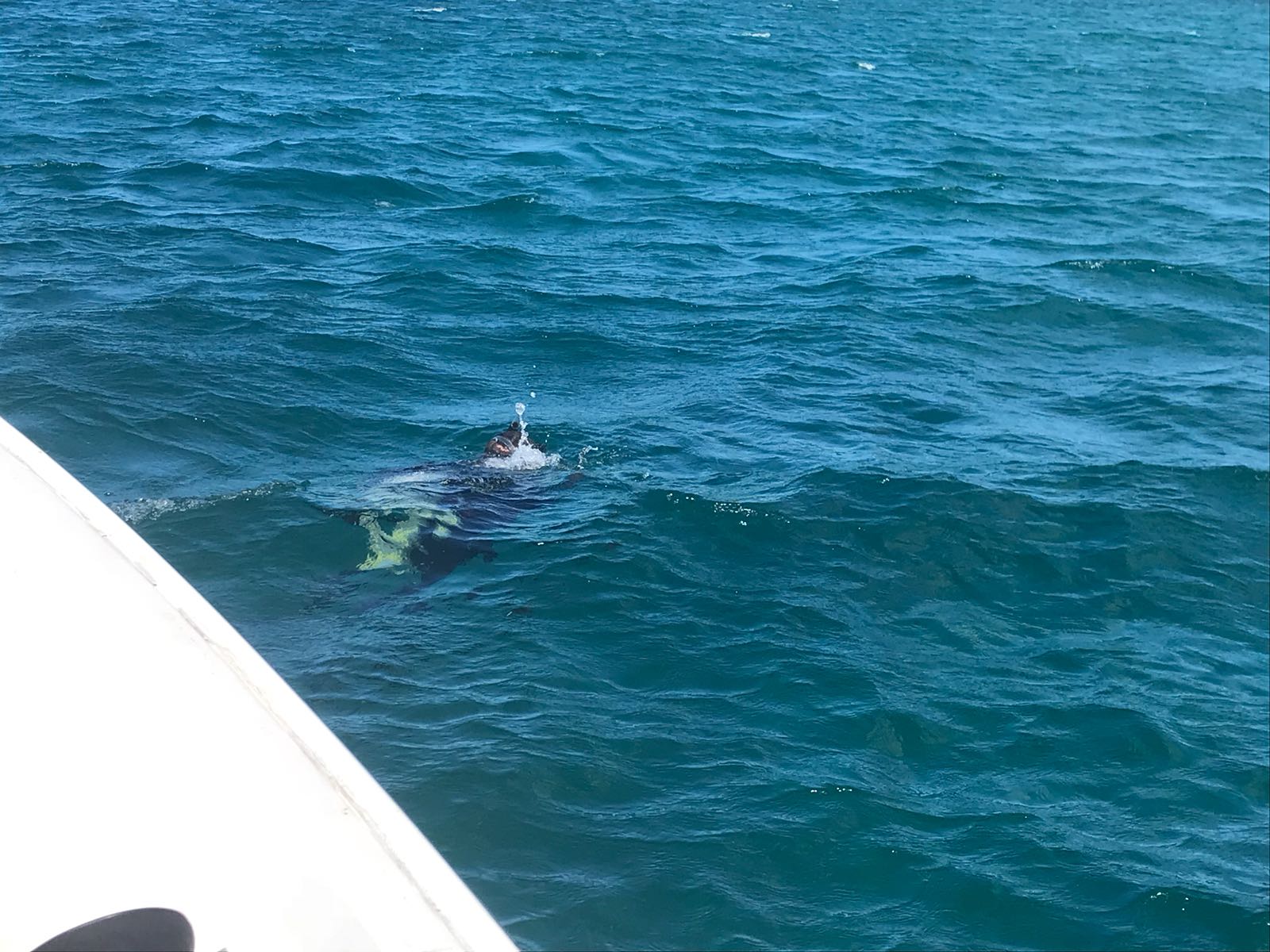 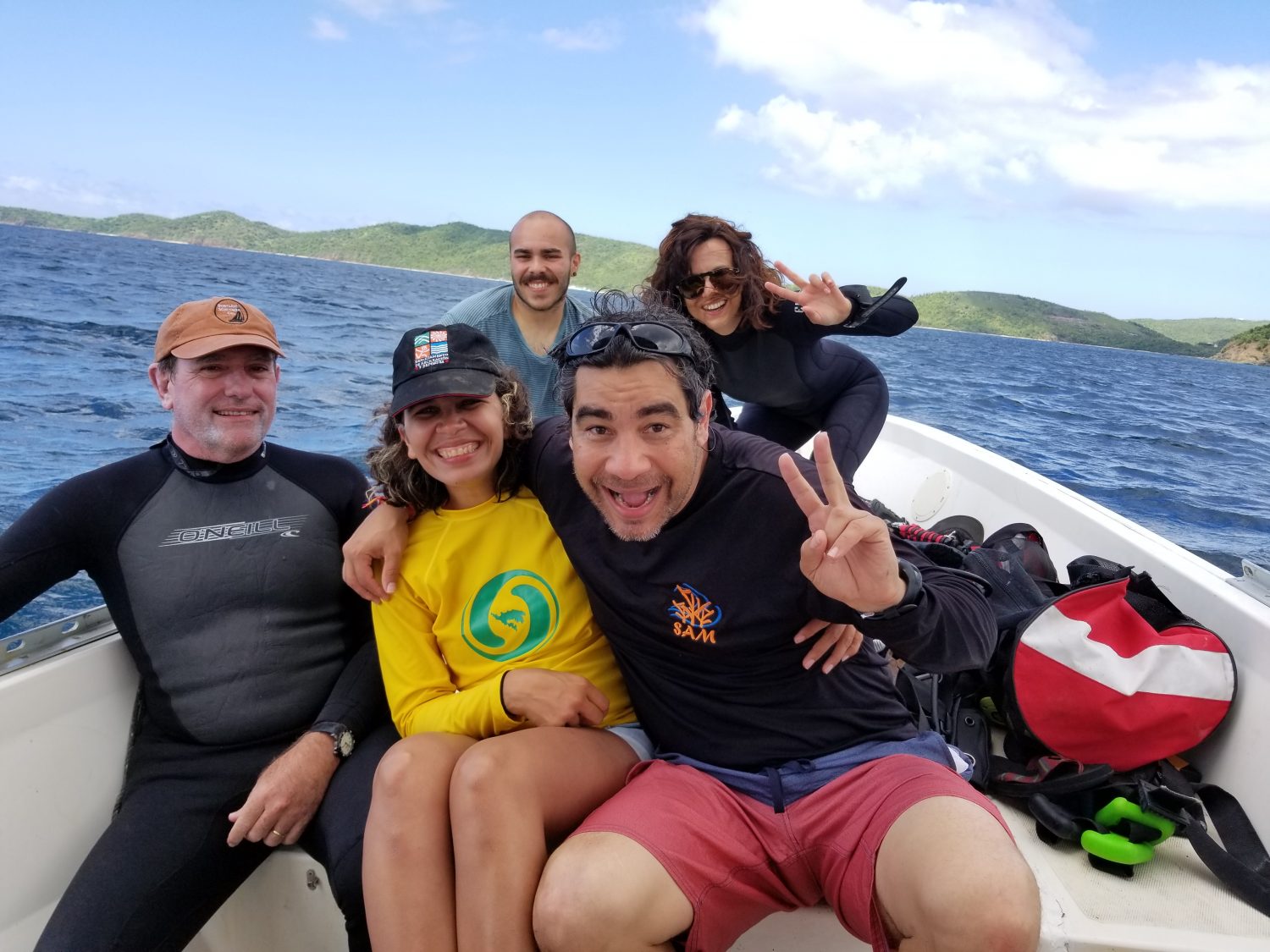 Orlando (M.S. in Marine Biology from the University of Havana) joined us from Miami, where he follows his passion for education teaching high school students. His background makes him inclined to approach his students with a more active-learning approach and coral reefs are his favorite topic. He approached us to develop a program to bring “science in practice” to his classroom.

With his participation we completed all the work we had planned and, of course, we solved the dry ice situation. Drilling falcon tubes and tying wires to them, we maintained all our samples in a liquid nitrogen atmosphere while separated inside the dewar. By overcoming this complication, as well as rough weather conditions, we were able to successfully complete one of the most challenging trips so far. Next month, we will be back for more and we hope there is less CO2 in the atmosphere and more into dry ice.

On August 30th, 2017 Hurricane Irma formed in the eastern Atlantic. No one imagined that 13 days later would hit Puerto Rico, starting an extremely difficult year for Puerto Ricans. Exactly one year later, we traveled to Culebra for our 6th trip to continue our study of the effects of this hurricane over coral reefs. Although many things have returned to normality, the effects of the hurricanes are still evident in the island. Underneath the common cheer, especially in a holiday weekend (Labor Day), locals are fearful of the chance of another hurricane hitting the island this year, especially after Isaac looms in the horizon.

In this trip, we performed our monthly monitoring, including survival and growth assessment. Additional samples were collected for nutrient analysis and to assess the physiological performance of the outplants. As usual, corals photosynthetic performance was assessed through PAM fluorometry and temperature sensors were replaced. Remarkably and thanks to the collaboration of FIU’s Center for Aquatic Chemistry and Environment (CREST-CAChE; an NSF Center for Research Excellence in Science and Technology on FIU) and Dr. Jim Fourqurean’s Lab, we were able to deploy an impressive array of sensors to characterize our study sites. These sensors can measure temperature, dissolved oxygen, pH, conductivity, turbidity, chlorophyll and PAR irradiance. Sensors will remain in the sites for a month, recording critical data to describe reef functioning and specific conditions experienced by our outplants in the different sites.

At this point, it was very rewarding to see most of our fragments visibly grown and healthy; although, we have around 40% mortality throughout all the sites. For the sake of the people of Puerto Rico, that of the reefs and of our experiment we hope Irma’s and Maria’s anniversaries don’t bring more hurricanes. Next month we will be back to retrieve the sensors, looking forward to examining the data they will provide.

Dr. Sabat is a Professor in the Department of Biology at UPR. Research in his laboratory focuses in demography, population dynamics and life history in a broad range of marine, aquatic and terrestrial species – from invertebrates, fishes, herps and up to primates. He has more than 50 publications, and has graduated 11 PhD and 11MSc students. Dr. Sabat has served as Dean of Research and Chair of the Biology Department at UPR.

"In the past coral reef research tended to focus more at ecosystem and community level questions. With the emergence of coral diseases and global bleaching events, the focus of research has shifted more to what is happening at the level of the organism, its tissues, and cells." 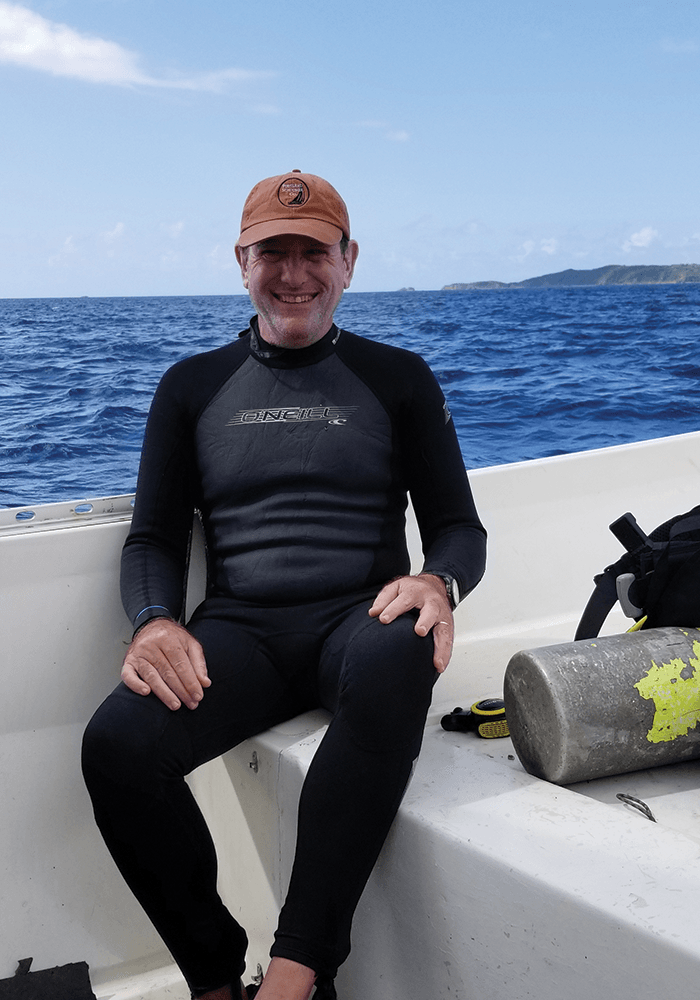 How did you become interested in the biology of corals?

My graduate education focused on fish reproductive strategies and life history. After completing my Ph.D., I moved my research focus towards population biology working with a wide range of organisms, such as orchids, palms, land crabs, insects, reptiles and primates. At that time (1990s) coral diseases and bleaching started to emerge as serious threats to the viability of coral populations, and work in my laboratory started to move towards the use of demographic models to analyze the impact of these threats on populations of emblematic Caribbean corals such as Orbicella annularis, Porites astreoides, Acropora cervicornis and Gorgonia ventalina.

What is the most important contribution of this project to the assessment and recovery of coral reefs?

Corals, although simple organisms in the sense that their most complex level of organization is at the tissue level, can exhibit very complex responses to environmental stressors – a good example being bleaching – because their tissues are populated by symbiotic dinoflagellates and microorganisms. Coral biologists are only beginning to understand the complexities of the interactions between a coral host and these “guests”. This project is innovative in the sense that it will relate the observed variability in survival and growth among colonies of A. cervicornis after hurricane Maria to the genetic response of the coral host after this severe disturbance, including how these guests modulate the host response.

Once this project is complete, what do you think would be the next step in coral research?

In the past coral reef research tended to focus more at ecosystem and community level questions. With the emergence of coral diseases and global bleaching events, the focus of research has shifted more to what is happening at the level of the organism, its tissues, and cells. The challenge will be how to scale up the knowledge that will be acquired at the organismal (colony) level to the whole coral reef ecosystem. And here, I think, is where demographic data and modeling will play a crucial role.

How will this project impact your future scientific development?

Hurricane María not only severely impacted coral reefs in Puerto Rico, but the whole scientific infrastructure of the island. This project has made feasible for me to continue to do research without much interruption. In addition, collaborating with coral geneticists will broaden my knowledge and perspective of the genetic mechanisms that corals have to handle environmental stress.